Geology sounds like ancient history. It sounds like the stories of millions of years ago. On Whidbey, geology is more like current events. It definitely affects daily life.

It is easy to look at the land with its forests and prairies and imagine it being that way for those millions of years. Not so. As recently as 16,000 years ago (yes, that’s a long time; but humans then were much like humans now), Whidbey Island wasn’t an island. Whidbey was an archipelago. The island was a series of islands. Prior to that, it was part of the mainland. Glaciers made the difference.

Watch the short video several times and learn something new with each viewing. (For a bit more entertaining and informative narrative, I recommend Nick Zentner’s lecture series.) As the Ice Age advanced, glaciers came south, the seas and the land shifted to inundate much of Whidbey. Eventually, the ice capped the island thousands of feet high, cut off the Puget Sound from the sea, turning into an enormous fresh water lake.

It almost didn’t happen. The glaciers only made it to south of Olympia, a cap that reached to the pole.

As the ice retreated, the salt water returned, and the land began to lift as the weight of the ice was removed. There wasn’t just one glacier. There were several coming from different directions. South Whidbey is scarred with north-south channels that align with Holmes Harbor. After that land was cleared, another glacier came from the east, recarving Central and North Whidbey along the lines of Penn Cove.

The glaciers were only here for about four thousand years, about the length of some current societies; but they radically changed the landscape.

The first humans arrived as the ice retreated. Thousand feet deep ice does not leave behind forest and prairies. It leaves behind land scraped to bedrock and dumps sand, gravel, and enormous boulders. Considering the rich natural wealth the first inhabitants found, it is impressive to realize how quickly the waters filled with sea life and the land sprouted plants. Gravel is common in the south. Central Whidbey received rich sediment that defined the prairies. North Whidbey has the cleaned and cleared rock walls of Deception Pass, probably the source of the island’s nickname of “The Rock.”

The activity is so recent that the land continues to rebound, lifting itself out of the water. As if the glaciation wasn’t enough, local faults can trigger rises and sinks from earthquakes. Shifts measured in feet are common, and can happen without warning.

Geology is the land, and the land is what we live on.

Drive north and south in the Maxwelton Valley and find a long, smooth valley that slowly climbs from Mackie Beach to the spine of the island. Try going west to east and get ready for ups and downs. That may not be an issue for a car, but bicyclists definitely notice.

Arrive in the prairies in Ebey Preserve and be treated to great expanses of open land aligned with sunrise and sunset for some very picturesque settings.

Continue north and join the crowds staring at the great stone walls of Deception Pass, as well as the tidal waters rushing through a narrow, whirlpool-filled slot.

The land continues to be dynamic. Gravelly land on the south end is studied for its tendency to slide. Slowly, the island is shrinking in length and height. Look at the large boulders off the southern tips of Scatchet Head and Possession Point. The island was longer then.

Folks who are curious about geology can find erratics, boulders left behind as the ice retreated. They aren’t going anywhere. Thirty foot tall rocks are hard to move and easy to find. Casually glancing at a neighbor’s yard may reveal smaller examples that aren’t moving, either. When in doubt, declare victory by making them part of the landscape.

Another find to find are from that slim era between the retreat of the glaciers and the arrival of the humans. Mammoths lived here. Their teeth, tusks, and bones can be found. Teeth are more plentiful because herbivores go through a lot of them. Tusks and bones aren’t casually left behind. They may get washed away from the rest of the skeleton, but a bit of a femur may also be very close to a very large pile of bones. Good luck hunting. 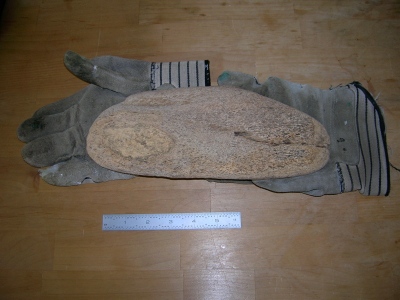 fragment of a mammoth femur

Geology made Whidbey unique. The cross-hatching, layering, and scouring less than 16,000 years ago make the island and its land some of the freshest property on the planet. What will happen in the next 16,000 years? Who knows? Maybe Mother Nature and Father Time are simply doing it all to chuckle at us.

Some see a face in the cliff

For those who want to truly geek-out on geology, there’s a hint of the possibilities in the field trip report, “Late Pleistocene Glacial History of Whidbey Island, WA“.