Affordability is relative. Got a billion dollars? Life can be very affordable. Got a million dollars? That doesn’t buy as much as before. Puget Sound, the big body of water that connects Seattle to the Pacific Ocean, is beautiful; and it is a lot more interesting because people can live in the middle of it. Island life can sound expensive, and it can evoke images of frugal retreats from pricey urban life. It is a paradox, not a contradiction. And, it is all relative. 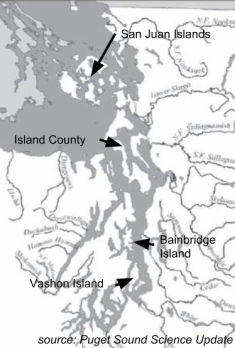 Whidbey Island is not the only island in the Puget Sound. It is the biggest, and holds the most people; but there are dozens of habitable islands to pick from. Whidbey Island is actually part of Island County, which pumps up the land area and population. North of Island County is San Juan County, a diverse archipelago including islands large enough for all of the major services, as well as private islands perfect for billionaire retreats. Further south, there’s Bainbridge Island; an island that gets a great view of Seattle’s skyline, and a direct ferry connection to downtown Seattle. Live on the island, commute via ferry, and work in one of the most vibrant cities on the planet. South of Bainbridge is Vashon Island, an island that is more rural, more likely to be self-sufficient, that has ferry access to Seattle, as well Tacoma.

Four islands or archipelagos, and four variations on affordability.

Let’s keep things simple by ignoring income. Income is a key player in affordability, but commuters skew the results by making money in one place and spending it somewhere else. Income isn’t necessarily local. Real estate, however, is all about local and location.

Of the four mentioned above, Bainbridge has the highest median house prices. Its photogenic orientation and ready access to Seattle salaries may be the reason Bainbridge has caught Seattle’s real estate fever. Watch it climb.

Vashon is next. Maybe the difference is the affect of being just a little farther from Seattle, even though it is also closer to Tacoma. It’s climbing, too.

The San Juans are next. They may not be as convenient to city life, but they unapologetically get views out to the Pacific, across to Canada, are regularly surrounded by whales and a canopy of eagles, and are valued because they aren’t as easy to get to. Privacy has its value. Those private islands may be bumping the numbers around.

Of the four, Island County is the cheapest. There are probably many reasons, but the simplest may be the amount of land available. Much of Whidbey is truly rural, farms and ranches devoted to food production, not just as a hobby. That also means fresher food. Higher supply for the same demand means lower prices. Whidbey and Camano Islands are just a little farther from the city; but not by much. There are retreats and recluses on all of the islands, so there are expensive properties, but there are also houses that can be bought for what some are paying in down payments in Seattle. At least in the data set for the graph, the price bump hasn’t hit to the same extent. Even if or when it does, catching up will take some time.

Affordability is relative, and the Seattle area is dealing with declining affordability. Whidbey is not immune; but relative to the other islands, it might just have an advantage for those who want to live the island life, wrapped by mountains, with great open spaces, yet close enough to commute south to Seattle or north to Bellingham.

Of course, if you just won the PowerBall lottery, well, affordability suddenly includes a lot of possibilities and a fascinating set of trips and travels that could include all of the islands. Good luck with that.