Be careful what you ask for. Check the post from the end of November, back when the carols were playing and thoughts of snow over the holidays sounded romantic. It’s all good, especially when the island only gets its couple of inches. Enough to cover the lawn, but not enough to get in the way of driving. Christmas was green, as usual. Valentine’s Day, however, may have some lingering white to contrast the red roses. It’s been snowing, and much of the island is shut down by choice or by necessity.

Learn to drive almost anywhere with a snowy winter and the island’s reaction seems extreme. Two inches of snow can convince thousands of islanders to stay home even though a foot of the stuff wouldn’t slow down people in the upper Midwest. But, there are at least a couple of reasons for that.

The key culprit is ice. Cliff Mass, a local noted weather scientist, wrote about; “Post Snowstorm Ice: The Winter Scourge of Western Washington“. Ask skiers in the Pacific Northwest about Cascade Concrete. Ski areas farther from the coast get fine, dry powder. Snow falling beside the ocean tends to be heavy and wet. Cold ground and streets plus wet snow equals ice after someone drives on it, packing it down. Our high northern latitude and tall trees means short days, long shadows, and very little melting.

You can see the pavement, but that doesn’t mean your tires will touch it.
Be careful out there.#WAwx on #WhidbeyIsland pic.twitter.com/D2wZIWsHAy

Usually, snow storms are small and short. Wait a day or two and the next bit of rain washes the mess away. Sometimes, like this time, we go from one storm to another. This time, the second one is forecast to be bigger than the first.

Behind the forecasts there’s a Forecast Discussion posted by the US National Weather Service in Seattle. They have style.

“The hounds of winter still have Western Washington in their sights.””

This weekend looks like a good time to make yet more comfort food, grab the next book or movie in that series, and make sure the heat stays on.

But, why not just plow? Why not just salt the roads? Ironically, salting roads beside the seashore is a bad idea. Salt’s already corrosive, and the extra brine doesn’t get diluted in its short trip to the sea. Local wildlife don’t appreciate it; neither do our cars. As for plowing, the County does plow, but don’t be surprised to find that they don’t spend millions on yet more equipment for a place that may get no snow all year.

The road crews get to deal with the island’s topography as well. The island is young, geologically. Even though the hills aren’t high, age hasn’t worn down their slopes. The prudent response is to have enough equipment to handle the key roads, lighter equipment for places that need more finesse, and closing some roads rather than challenging nature. There’s even a series of maps showing which roads get plowed and which roads get closed. Go the County’s site for the details. Here are a few glimpses in the meantime.

For the next few days there will be more sounds of chains or studded tires with an occasional squeal and even less occasional crunch. The lucky ones are the people who can stay home or take public transit. Whether people get out and about or not, everyone is gathering stories, comparing snow levels from seashore to the highlands. Elevation makes such a difference that it’s possible to have no snow at a beach cottage, but not be able to get out because six inches or more of snow has closed a road that leads to the highway. 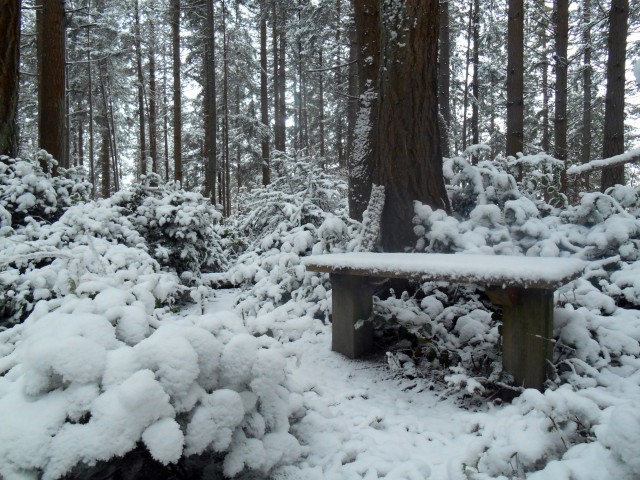 Islanders are adaptable and resourceful. Snow can be a treat, an excuse to take a day off, build snow creatures, walk through the woods, and visit neighbors. Snow can also be a reason to test out that ski and snowshoe gear. Or maybe, those within walking distance of their boats can shove off and sail to some store by the seashore. It’s an island. That’s an opportunity – or is that just a rationalization to play around in boats…