“Time and tides wait for no one.” That’s the excuse for the slight delay in this week’s post. With just a nudge in the schedule, this post gets published on a day of very low tides and fairly high tides, a good day to witness some of Nature’s quieter extremes.

Tides are one of the seemingly magical phenomena for people living by the sea. Twice a day, the tides come in and out. Depending on the place, the tides can be as dramatic as the Bay of Fundy’s 40 foot shifts, or the Mediterranean’s barely noticeable few inches. Shrinking or expanding beaches are the most visible effect. Be careful where you put your beach chair,  if you don’t want it to get wet or wash away. Whidbey Island experiences something different. 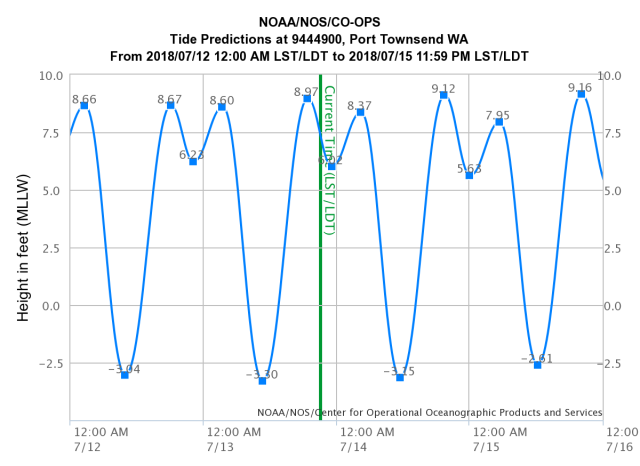 Every day is different, but in general, Whidbey’s tides rise and fall for a range of about 10-12 feet. Stand at the low tide line, imagine someone standing on your shoulders, and realize that you’d both be underwater unless the top one plays professional basketball. Multiply that. Look at the length of Puget Sound and realize that the top of the nearly hundred mile long body of water will rise and sink, fill and drain, within a few hours. A typical tide carries over a cubic mile of water (1.26 cubic miles). If it came by as a cube, it would be an awesome event attracting world-wide attention. Instead, if flows in and by and out with barely a notice, unless you live by the water. 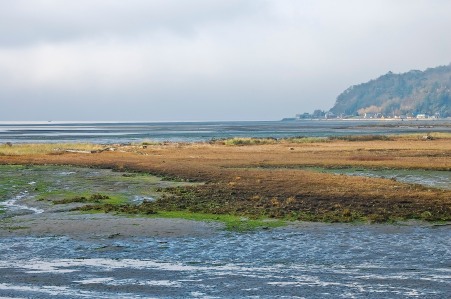 Rising 12 feet is impressive, but Whidbey Island has several bays and beaches that drastically change. Up and down may be a dozen feet, but in and out the water can travel a mile. Cultus Bay, Useless Bay, Mutiny Bay, and others expose tide flats broad and long enough to change a map’s coastline. The southern half of Whidbey is dominated by sand and gravel dropped by the glaciers, which naturally cascades into the bays, filling the shoreline with shallows that then drop off to waters hundreds of feet deep. In those depths and at their edge, live animals that commute with the tides, cruising in to dine, then retreating quickly, hopefully more quickly than the receding tide. The crabs come for their dinners. Humans take advantage of the situation to set crab pots at the dropoff, and dig clams in the flats.

All of that cubic mile of water sweeps past Whidbey Island. It isn’t just affecting tides. It’s also affecting currents.

The northern part of “The Rock”, one of Whidbey’s nicknames, truly is rock. The majority of the water flows down the west side of the island, down Admiralty Inlet; but a significant chunk is steered through the hard rock cliffs of Deception Pass. There’s a tide range, there, too; but the tides are so strong and the Pass so narrow, that strongest currents in Puget Sound run through there, as much as 10 knots. Walk onto the Deception Pass Bridge, look down, and see whirlpools sluicing and dancing past. From the water, realize those 10 knot currents mean either a fast trip through the Pass, or an impossible challenge for muscles or machines. The water can pile up enough that one side of the Pass has a higher sea level than the other, sometimes by as much as 6 feet. Paddling into the current also means paddling uphill.

On the east side of the island, the waters mix. It can be difficult knowing when and where the water from the north will meet the water from the south. It’s the quieter side of the island, and preferred by recreational boaters, but the currents can be tricky. The west side is better behaved, but there the traffic is dominated by massive ships cruising by at 20 knots, not sleek sailboats relaxing along at 2 knots.

Low tides are best for investigating tide pools, watching flocks of sea birds, maybe finding sand, stranded starfish and crabs, and generally meandering about. Watch out for the mud though. It isn’t all sand. High tides are best for boaters trying to avoid places like Propeller Rock (a rock that’s frequently cut by boats cutting corners), or some of the shallower marina entrances. Sailors, however, may be more concerned with timing their pass through the Pass, or finding a quiet anchorage while waiting for the water to turn their way.

The details are infinite. One of the best guesses about what’s going on goes beyond guessing. NOAA has a series of tools and resources online for measuring and estimating tides and currents. Sometimes the National Weather Service adds a modifier if a storm is due during a high tide. A high tide, plus high winds, plus even a moderate storm surge from a low pressure system can wet the deck of some unfortunate waterfront properties, or strand hikers along cut-off beaches.

And yet, all of that natural drama can happen with barely a sound. The sounds are there, but they may not be apparent until you’ve lived at a place for a while. The unexpected tolling of a bell on a buoy, the rush of water across a bay’s sand and gravel at just the right time in the cycle – or the loud curses of a boat owner who finds themself aground, at least until the next tide comes in.

Because, the tide will come in, and go out, and continue doing that for many lifetimes. The tide isn’t waiting for us, but if we wait for it, we can witness a natural phenomenon everyday, for free.

One thought on “Tides And Currents”