Every place has faults, but for places along the Pacific Rim of Fire, there are faults and there are faults. Whidbey Island isn’t perfect, it has its flaws; but some of the faults that are natural are geological. Earthquakes happen here, but you might never notice them. But, it is good to be prepared for them.

Whidbey Island may be part of the Rim of Fire, but relax. There are no volcanoes on the island, except at science fairs. There are, however, three volcanoes that are relatively easy to see on the horizon during the day if the weather permits. Within a hundred miles or so there’s Mt. Baker (also known for its ski resort and record snowfall), Mt. Rainier (Seattle’s iconic backdrop and an excellent National Park), and less-known Glacier Peak (which some think is the most likely to erupt – sometime.)

The fault lines, however, run right under the island. Some people proudly proclaim that their house sits over a fault, something to add to cocktail party conversations while simultaneously hoping it’s never more than a topic for small talk. 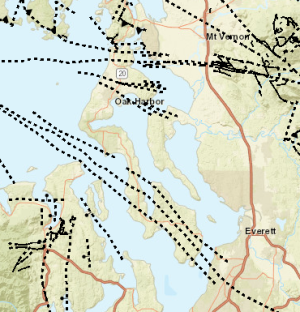 The faults run in two groups. One set crosses the north part of the island from west to east. Another set runs from the northwest to the southeast, starting by Vancouver Island and aiming itself at Seattle’s suburbs. These aren’t surface faults like California’s San Andreas, which can be spotted from the air. These also aren’t the storied Juan de Fuca fault zone off the coast that has been the subject of several tsunami-related documentaries. Whidbey’s faults, particularly the South Whidbey Fault, are deep, miles below the surface.

A recent example generated a magnitude 1.0 quake, something so small that it is doubtful any human could feel it. Buffer it with 16.4 miles of Earth’s crust and find that the effect is even smaller. One good way to get a feel for the activity is to check out the PNSN (Pacific Northwest Seismic Network) Recent Events page. For comparison, browse their links to California, Alaska, and Japan and realize that Washington doesn’t shake as often. 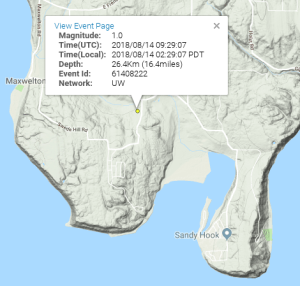 Significant earthquakes may not be as frequent as in other places, but they can be large. Magnitude 7+ have been documented. That’s enough for damage, outages, and a fair amount of repair. Hence, be prepared.

An earthquake kit is one of those “shoulds” that are frequently overlooked. It makes more sense to have one on the island. They’re good for more than earthquake responses. Storms happen. So do power outages. Knowing there’s a ready supply nearby can ease otherwise tense situations. Katrina, Sandy, and Maria, three major east coast storms prove the benefit of a bit of self-reliance. Some of the local earthquake scenarios directly impact Seattle. In a case like that, little Whidbey might have to wait a while to get help. Hence, the earthquake kit; and hence, the sense of community that exists on the island. We’re in it and on it together. 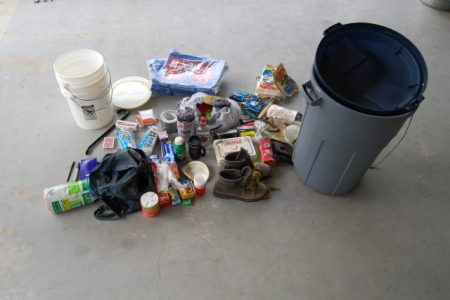 There are official sources for earthquake kits. FEMA (Federal Emergency Management Agency) has suggestions, and so does the Red Cross. Island County has suggestions that could address local concerns. And then there’s the DIY approach. Here’s one example that involves a trash can and a few shopping sprees at the local hardware and camping stores.

For more of a professional and scientific perspective, check out another Nick Zentner video. Geek out and get some perspective that skips the sensationalism that’s necessary in today’s news bites.

It is the nature of such events that a quake could shake before this post is published, or it may not happen in most people’s lifetimes. Storms come with warnings and forecasts. Waiting for an earthquake is waiting too long. Prepare for it now, and then give it a lot less thought – unless you want to talk about your kit at your next party. “Want to come over and see how prepared I am?” (Probably not a good line.)

5 thoughts on “Whidbey Has Faults”