Cooling It On Whidbey

Seattle is having a heat wave. Seattle is has had weeks of clear skies and no rain. Locals are having a hard time adjusting. The area is known for drizzle and damp, not brown lawns and hazy skies. Records are being set. And then, there’s the island. Whidbey may be warm, and locals may be complaining, but Whidbey isn’t Seattle. It’s much cooler, in many ways.

We’re in August. A typical August is dry enough to rank the Puget Sound region as one of the driest in the nation. Typically, from mid-July to mid-September, the mainland relies on melting snowpack for water. It sounds strange for a place with Seattle’s reputation, but there are years when water needs to be rationed, or at least its use limited. Lawns allowed to go naturally brown are contrasted by neighbors who water until the green is brilliant and the runoff wets the sidewalk. This year, the rains stopped before the Fourth of July and are only forecast to make casual appearances for weeks.

Take a look at the map of the temperatures at 6PM, after the hottest part of the day. Mainland temperatures are in the 90s (F), with spikes in micro-climes (and possibly inaccurate weather stations). The farther they are from the water, the higher they get, until the stations rise high enough in elevation for the temperatures to drop. Get close to the water and the temps get down to the mid 80s (F). Take a boat or a bridge to the island and say hello while 70F embraces you. What’s that worth?

Thank the natural air conditioner that is the Puget Sound. Famous seaside resorts in California, Florida, and Hawaii can feel like bathwater if the conditions are right. The Puget Sound’s islands are wrapped in a nearly-constant 55F heat sink that is relentless in its cooling effect on the air that flows over it. Shallow bodies of water can get hot as the Sun bakes the lake or sea bottom. Here, the depths drop hundreds of feet, canyons that never see the Sun, that cool the air above in summer and warm it in winter. Days like these can raise it a bit. Let’s check the data. Yep. Instead of 56F in early August, we have 56.1F. Whoa, there.

As cool as the water is, folks swim in it. A 20F difference between the air and the water can be startling. It can also be refreshing. Devotees swim in every season. It’s said that “There’s no such thing as bad weather, just bad clothing choices.” The same’s true in the water. Some dive in as-is. Skinny dipping undoubtedly happens. Others opt for a variety of swimwear including things like wet suits and dry suits. Personal preference makes a difference.

Two things that make it easier to dive in are: 1) classes about the practicalities of open water swimming, and 2) having a shower nearby to wash off salt water. The caution is that, while the water can be refreshing, it is hypothermic. Proper flotation and insulation are necessities. Scuba divers can tell tales of cold and swift currents that must be respected. 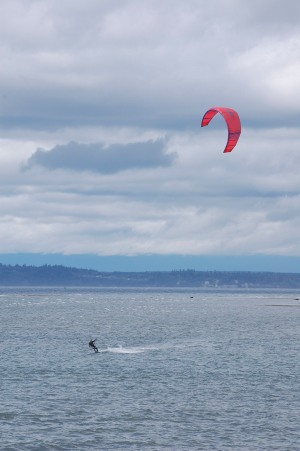 Swimming isn’t the only way to get wet. Skim boards, kite-surfing, and sailing get people onto (and sometimes into) the water. Get warm, get dunked, get going again.

Most locals don’t find the need to get wet, unless you count the extra cocktails with ice served on the deck or at the picnic.

The first week of sunshine is welcome, especially after a June-uary. The second week is a good time to take on outdoor chores. After about a month, a bit of rain is welcome and may be applauded. By October, it is nice to see the aquifers refill, the lawns naturally recover, and the cars get a bit less dusty. By November, well, that’s what memories are for. In the meantime, Whidbey’s natural air conditioning is one more reason to stay on the island.

One thought on “Cooling It On Whidbey”