Affordable living? That’s easy – if you have a lot of money. Just ask many of the retirees on the island. Working and living on the island? Well, that gets more difficult; but there are people and organizations trying to make it easier.

Last night, May 15, Island County Planning held a community meeting chaired by Helen Price Johnson, Commissioner for the south part of the island. About fifty people showed up to listen, ask questions, or in some cases speak paragraphs about their cause before asking a question that was moot – a typical event in a democratic republic. (Or is it a republic democracy?) This was one of those wonky topics that is vitally important to some folks and phenomenally boring to most, even those who would benefit from knowing more.

In the last couple of decades, the topic of the cheaper end of the housing market has grown from providing shelter, to housing the homeless, to housing those with marginal jobs, to finding housing for people with fill-time jobs. It isn’t just a Whidbey thing. It’s global. But housing is local, which means solutions are local, too; maybe with inspiration from other locales. Whidbey Island is easily generalized by the Navy, tourism, and those retirees. Whidbey Island is also easily generalized as Oak Harbor (The Big City), a few rural touristy towns, and the great unincorporated rural tracts that now mix farms with estates.

The County Planning Department doesn’t get the luxury of such easy generalizations. They also have to recognize the need for parks, airports, schools, wetlands, steep terrain, roads, harbors, and a seeming infinity of infrastructure that hold a community together. Oh yeah, and then the residents rightfully pride themselves on their resourcefulness and creativity, which means the County gets to field an entertainingly bizarre variety of questions about possibilities while recognizing that many folks will act first then seek forgiveness instead of starting by asking for permission. What a job.

Recent estimates show the majority of full-time workers on the island work off island. That’s a lot of commuters. Recent anecdotes relate how some businesses are losing employees because the workers can’t afford to stay on the island. The island needs every stream of income it can receive, and also needs people to work here to maintain what’s here, including its culture.

Pull it all together and there are balancing acts and battles between how things have always have been done, what needs to change, and whether economics and regulations will allow everything that’s necessary. Not easy.

The good news is that almost everything is being considered at least somewhat. Tiny houses, composting toilets, zoning changes, ADUs, as well as at least a dozen other ideas have to be prioritized as to which can help the most, the quickest, the easiest. From what they showed and from other sources, there are over 100 homeless, over 400 unsheltered (living in cars, etc.), over 600 at risk (housed now but maybe for long), and over 100 couch-surfing. Don’t be surprised if that’s a low estimate. There are a variety of assistance possibilities, but the waiting lists are measured in years. Years doesn’t help someone who lost their housing last month or may lose it next month.

Ironically, Whidbey Island is also seen as a source for solutions. One of our resident architects is internationally known for his “Pocket Neighborhoods”. Ross Chapin isn’t the only advocate for shifting conventions, but he is the leader who also just inducted into a Hall of Fame. (An architect inducted into a hall. Very appropriate.) His philosophy is deep enough to warrant a book, but one simple application demonstrates a new way of living. Instead of twelve houses lined up along a street or facing each other around a cul-de-sac, have them face each other across a shared lawn with the driveways and cars set to the back side of the house. Emphasize the people and the green space, not the vehicles and the asphalt. Provide some common or communal buildings and each house doesn’t have to be over-designed to include a formal living room, a formal diving room, an enormous kitchen, and spare rooms for occasional guests. Each house shrinks. Costs shrink. Community grows. Humanity grows. 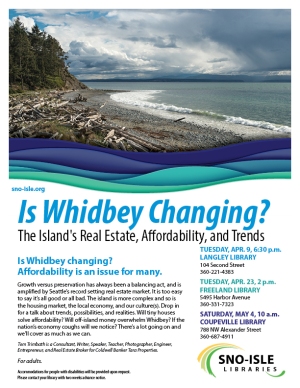 Affordable housing is a something that’s been mentioned here several times, particularly in the “Is Whidbey Changing” series. The series was inspired by this very conversation that is happening in government, within businesses, in the media, and probably at almost every party. Here’s the additional irony revealed by the data. Whidbey Island is less affordable than it was and isn’t as affordable as it needs to be, but it is more affordable than the other major Puget Sound islands, and the various cities along the mainland’s shores.

One lesson learned from a globe’s worth of examples is that adding supply doesn’t drop prices unless so many houses are added that the investors are fully satisfied. Vacancy rates are up around the world. South Whidbey’s vacancy rate is over 25%. It isn’t a question of having enough houses. There are more than enough already built. Filling them becomes the issue. Vacation homes help people relax. That’s why they build or buy them. Being able to drop in anytime is far more convenient than having to call for reservations at a hotel or motel. There’s less reason to pack because everything can already be there from the last visit. There’s also money to be made thanks to short-term rental agencies like AirBnB, VRBO, and Vacasa. Then there are those who see real estate as an investment, buy a house, and leave it empty. Passive appreciation without the risk of rental damages is appealing worldwide. That’s why it was refreshing to hear at least some interest in tax incentives/disincentives to encourage people to open their doors or at least help pay to help make it easier for the maids, gardeners, and contractors to find places to live.

There’s a lot to learn, and most folks only have to learn what applies to them. That’s more than enough for most people. The County is asking for input. Browse their site for more information, including ways to contact them. They define what’s allowable. Ask the various architects and contractors about what they’ve seen as practical. The article “A Place to Call Home: The Imagination and Influence of Whidbey Island Architects” in Whidbey Life Magazine can be a start. And of course, for some of the data behind the words, review the “Is Whidbey Changing” series of posts on this blog.

In many ways, Whidbey Island is ahead of the conversation thanks to the people who live on, work on, and care for the island. The right questions are being asked about affordable living, and Whidbey Island may be the place that provides some of the answers for island, and elsewhere.

Oh yeah, and if you can afford to live on Whidbey Island, celebrate that! That’s great news. Let’s make that circle a bit bigger, and then a bit bigger again.

3 thoughts on “Affordable Living On Whidbey”