Cuteness happens. Go back two posts and read about Elk Bear And Whales. They’re majestic, but they aren’t exactly cute. Balancing their impressive presence is another trio of critters: deer, bunnies, and turkeys. They’re here, too; but the greatest threats they pose are usually to traffic or gardens. Drive slowly enough and enjoy more of our neighbors who know no bounds, except the ones we try to set.

Deer are everywhere, or at least it seems that way. They like our gardens, and will cruise through sampling whatever seems tasty – regardless of whether it is labeled deer-proof or more accurately deer-resistant. Deer here are a bit different from deer on the mainland. Island species can tend toward ‘insular dwarfism‘, a tendency for big species to shrink after a few generations of island life. If you thought deer were cute before, get ready for the compact version. Also get ready for a tamer variety. With a lot less hunting there’s less reason for them to flee. A flock may fill a yard, patiently munching the dandelion heads down to the greenery. Thanks, but can you leave the ornamentals? A fawn the size of a shoe may wander up to someone out for a walk. We’re all so close, hemmed in by the same waters, that maybe being neighborly is natural.

Bunnies, those silly bunnies. Of course, most of suburbia has rabbits. Gardeners guard against them. There are plenty of them for the simple reason that they breed like rabbits. South Whidbey, in particular, has such an infestation that it’s been called an invasion. The good news is that it is a colorful invasion. For decades, the fairgrounds outside Langley hosted the Island County Fair. It does something similar now, though the name has changed a bit. For decades, bunnies were brought to show and brag about. And then, after the fair was over, maybe they escaped, maybe they were set free. Now, show bunnies in all their fancy forms have overwhelmed the grounds, the schools’ fields, and garden after garden. They’re tamer than the deer because they were raised that way. Don’t trip over one.

Call someone a turkey and most folks can only imagine something frozen, wrapped, thawed, then roasted for Thanksgiving. It is much more fun watching them walk around. Small flocks form and wander through the forests and fields, slowing traffic, showing up in social media posts, and generally providing a nice counterpoint to the typical ducks, gulls, and geese. Their population is smaller. They’re not as good at avoiding the cars and coyotes, sadly. But they are a treat as they gobble their way along the street. Some, maybe all, of them are escapees from turkey farms that operated decades ago. 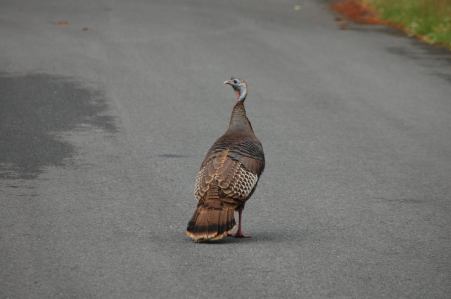 Other cute species roam the island: hummingbirds, seals and otters, pelicans are now part of the parade, and what else? Find a comfortable and quiet place to sit, and sit. Just sit. Eventually, something sweet will walk, fly, or swim by. Say hello to your neighbors. And folks will understand if you also erect deer fencing, chicken wire, and maybe some overhead netting. Cuteness is nice, but there are limits, you know?

2 thoughts on “Deer Bunnies And Turkeys”