Growing Whidbey Or Not

The area’s booming! At least that’s what the press says – and they’re right. Seattle is booming. Whidbey, however, is Whidbey. The island is booming in its own way.

Keep in mind, when talking to someone from the east coast or another continent, islanders may say they’re from Seattle. If folks aren’t familiar with the area, they can easily get confused by a description like; “Oh, I live on an island in the north part of Puget Sound.” Accurate, but not as useful as saying; “I’m from the Seattle area.” Inaccurate, but a nice invitation to tell more if they want to learn more.

Seattle is booming. In less than ten years, Seattle grew by more than 19%. The Seattle area is adding about 1,100 people per week. Per week! That’s a new Langley, Coupeville, or Freeland every seven days. But not here.

Growth is a big topic on the island. Balancing growth and culture isn’t easy. Fast growth is hard to control. Whidbey is growing, but at a much more sedate pace. 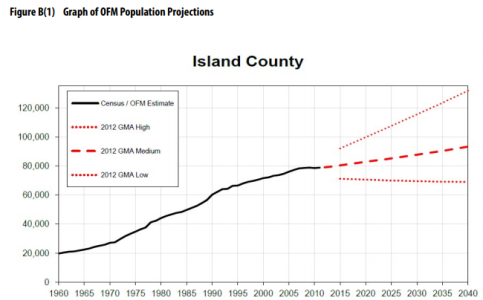 It could take the island 26 years to gain the population growth that the region will see within two months. Instead of 19% in 10 years, the island is more like 12% in 26 years. Growth, but not the storied growth of The Big City.

Take a look at a map of growth in and around the Salish Sea. The towering spikes rise along I-5, and pop up in Vancouver and Victoria in British Columbia. There is a small cluster on Whidbey, but you have to know the island to spot the clump around Oak Harbor. Regardless of the various initiatives and economic developments outside of Oak Harbor, the biggest population growth is projected to come from the few thousand extra people associated with growth in the Naval Air Station. The rest of the island is barely visible.

Small noises are much louder when they happen in quieter places. So, any growth on Whidbey Island stands out because it’s one of the few places that’s outside the frenetic lifestyle of the mainland. Seattle may absorb a thousand people without making the news, but that many people on the island would stand out. New faces in the grocery store line? Say it ain’t so! 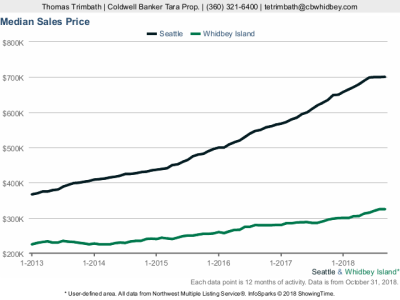 Whidbey’s small growth has shown up in the statistics. The island may be smaller than The Big City, but housing prices are rising here, too. The biggest difference is that Seattle started earlier and higher. Where Seattle say 11.7% growth, Whidbey Island saw 12.1% growth. Both of those are far above the national average, and both raise questions of sustainability; but those topics may get separate posts.

Seattle is expensive, but not relative to most cities on the Pacific Rim. But, it is feeling the growing pains while showing signs of cooling down to ‘only’ twice the national average housing price growth.

As a previous post showed, Whidbey may be expensive, but it is cheap relative to the other major islands in the Puget Sound. Will it lag Seattle, and continue watching prices rise; or will the ferry and the natural moat keep growth away? The island has issues that limit growth: water and septic systems are two of the main ones. Maybe pressure from the mainland will inspire innovative solutions, or maybe a quiet culture will be preserved. The reality will undoubtedly be something different.