Two women walked into a bar – almost. It was a nice Tuesday evening. One was from Seattle. Her friend was from out of town. Both had heard about Langley, WA; and the visit was a good excuse to drop by and see what the town was really like. Hop the ferry, drive to the seaside village that is Langley, and check out the night life. Oops. They arrived at a proper Seattle bar hopping hour of 9PM, and couldn’t find an open door. Such is life on the island.

It’s not quite true that wasn’t anywhere to go, but it was for those two casual, spontaneous visitors who expected to simply bump into a place or two or three. Somewhere on the island there’d be a pub, but Whidbey Island is known for being a place where “they roll up the sidewalks when the Sun goes down.” That’s not quite true, either. Concrete is too hard to roll.

There’s a reason for their disappointment. Many businesses on the island are owned by people who take work/life balance seriously. (“Hours Of Operation“) Plenty of pundits talk and write about balancing work and life, but money pressures tend to make it hard to stop working, at least in America. Islands are known as places where people go to relax. Islanders do more than talk about finding time for the real part of life. Frequently, that’s why they moved here. Shorter hours and fewer work days are a self-supplied luxury.

From the outside it seems as if there’s less going on. From the inside, however, the days, evenings, and nights are just as full. Businesses may not be open, but friends’ houses might be open for a party, jam session, or just some folks meeting for drinks. Become part of the right community and you may find a social calendar that’s overbooked. Filled is good. Overflowing is going too far. Just say No, politely. There’s a good chance friends will understand. 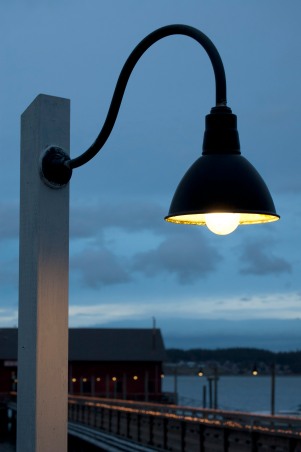 When in doubt, check the papers or Facebook or whatever you use to keep track of such things. (Maybe get introduced to Drewslist or one of the other local sources, but that’s a separate post.) Oak Harbor is big enough to keep busy when Langley and Coupeville have gone quiet. Stay along the main road and find familiar brands, or explore a street or two away and find something more local.

Another approach is to see it as an opportunity. If a dance on the island ends at 9PM, maybe there’s enough time to drive off the island and into town for part two of the evening’s activities. The main trick is remembering the ferry schedules, which can make such a trip a bit tight.

Ironically, this story can be passed along because two guys were working late. A friend and I had just finished giving a talk at the local library and were standing on the sidewalk talking about how it went. It was a good talk, and there was more work to do that night because of it. Balancing work and life sometimes means working longer hours than the bartenders – and then making up for it, later. It’s all good.

One thought on “Closing Time”