Seattle To Whidbey And Affordability

“Oh, we’re from Seattle.” Millions of people say that, but fewer than a million actually live in the city. That’s typical of most neighborhoods around big cities. The less someone knows about where you live, the easier it is to point that pin at the big recognizable name: Seattle, in my case. Get closer and the definitions get more precise, and stereotypes and labels fall away. That includes Seattle’s phenomenal housing market. “We’re from Whidbey” may not be as recognizable outside the area, but some very basic economics may make that claim more common.

Seattle has a population that’s rapidly approaching one million, but for now is under eight hundred thousand. The area from which people may claim to be Seattle-ites holds over four million. That’s seven times as many non-Seattle-ites as Seattle-ites.

Whidbey’s population may be about one-tenth Seattle’s in a little more than the same area. That makes life a bit less crowded, and can make island life quieter.

Whidbey has affordability issues, too. That’s no surprise. Much of America, particularly the parts along the coasts, have affordability issues. Whidbey is an island; it is nothing but coastal. And yet, there’s a variation in housing prices that creates a variety of options. Oak Harbor has the lowest median sale price for houses, and military personnel benefit from the Navy base’s services. Why commute to Seattle when you can commute from one side of a small city to the other? Langley has the highest median sales price, but that’s not a surprise for a well-known tourist town. Liked your visit? Buy a house. It happens. 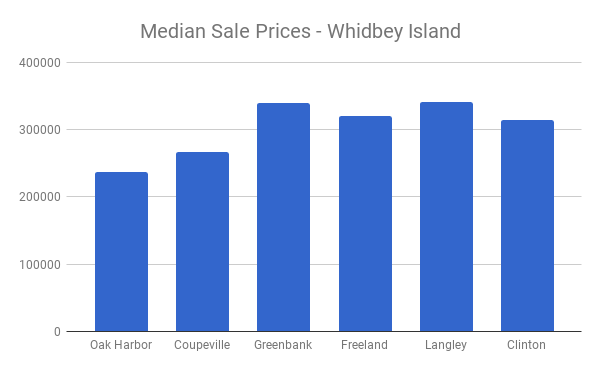 The variation may seem large when looked at from on the island, but step off the island and watch the prices jump.

The ferry from Clinton connects to the mainland in Mukilteo (a great name). A ferry ride, the natural moat, the unofficial border between the island and ‘Merika, help create a 37% jump in prices. Conversely, island living can be 27% cheaper, at least when it comes to housing. 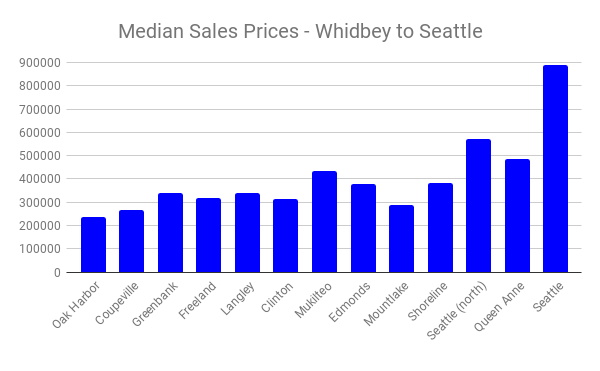 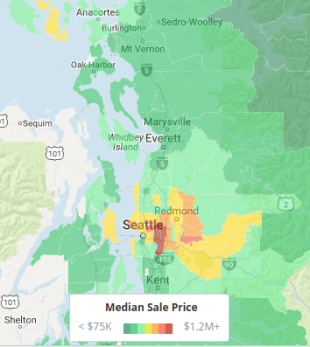 Draw a squiggly line along the roads from downtown Seattle to downtown Oak Harbor on the northern part of the island and get a glimpse of some people’s commutes. Whidbey is close enough for a commute, and far enough away to slow down. Along that line are a series of cities and neighborhoods that show how Seattle’s unaffordability is leaking past its borders.

Follow that line and watch the prices abate a bit, though that may have more to do with moving away from views. Keep following that line to downtown Seattle and the median sales price rises over 180% in the city, or a 56% price reduction on the island, relatively.

As if that wasn’t dramatic enough, take a detour to Seattle’s Eastside (which isn’t Seattle and doesn’t belong to Seattle, and which is so well established that locals call it The Eastside). Some neighborhoods over there have median sales prices in the millions. The down payment on those houses can be enough to buy a house on Whidbey for cash. 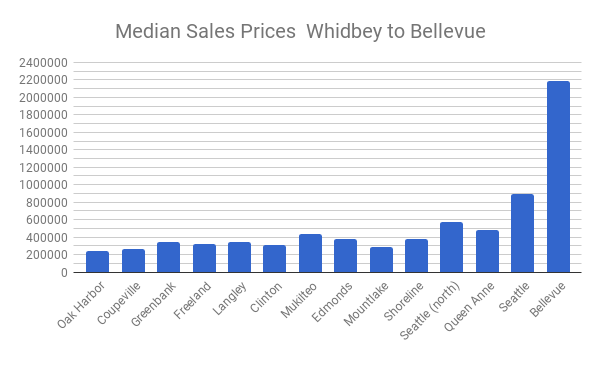 Such pictures are rarely as simple as a few numbers in a spreadsheet or colors on a map. Even within Whidbey there are big swings in prices. A cross section of the island would go from high-end waterfront to more affordable homes back from the beach or settled into the forest, and then mirror the trend as the opposite shore is reached. But, that’s true everywhere, even in Seattle’s neighborhoods. That’s what makes house hunting so engrossing.

Conventional wisdom suggests a lag between Seattle’s economy and the island’s. Maybe Seattle’s surge in pricing is rippling out and will someday touch Whidbey’s shores.

In the meantime, I’ll people that I’m from Whidbey. If that doesn’t answer their question about where I live, I tell them I’m from Whidbey, and island in Puget Sound that’s north of Seattle. Am I from Seattle? Not anymore. I’m living an island life.

2 thoughts on “Seattle To Whidbey And Affordability”