The Isle Land That Is Whidbey 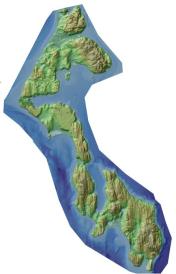 Live on Whidbey Island and get to listen to people’s reactions when you tell them your address. It is an island in the Sound north of Seattle. Say it that way and people envision some tiny, remote rock that’s weather beaten and barely populated. Not quite.

There’s a lot to write about on Whidbey, but to get this blog going it makes sense to start with two things: the water and the land.

Whidbey Island is surrounded by water. That seems like a simple statement, but many islands are barely separated from the main land. The waters around Whidbey are an extension of the Pacific Ocean, hundreds of feet deep. They are a moat broad enough and deep enough that the main way people get to the island is either from:

Still water may run deep, but deep water can run. Watch the water flow past either side of the island and realize that quietly and powerfully the Pacific Ocean tries to fill and empty Puget Sound twice a day. The tides rarely make a noise, but the seventy mile long basin can raise and lower up to 12 feet. About 1.26 cubic miles of water come in and out. At narrow places like Deception Pass, currents can run to 10 knots, faster than some boats can sail. It all flows around Whidbey on its way to Seattle, Tacoma, and Olympia.

The shoreline, however, usually isn’t hundreds of feet deep. Shallows define places that get names like Useless Bay. They look like great harbors at high tide, but can be great exposed flats at low tide, an excellent event that attracts folks who want fresh clams.

Those shallows exist because much of the island continues to shed sand and gravel deposited by glaciers, and accumulates more as those tides wash the Sound. The whales enjoy the shrimp that have the ultimate beach properties – until they’re gobbled up.

There’s a lot of land, and a lot of variety. From north to south, the land changes from hard rock cliffs to a mix of sand, gravel, and clay. Bedrock isn’t a given on the south end of the island.

As for small, quaint, and remote, nope.

Well, quaint, yes; but that will be its own post.

But not small. Whidbey Island is one of the longest islands in the US. A drive from top to bottom takes over 50 miles, mostly on a two lane highway that encourages patience and an island pace if you get behind a slow truck. Stretch it out and get a drive that’s almost as long as a trip from Everett through Seattle and down to Tacoma.

Not remote, either. Sure, Whidbey is an island, but thanks to the ferries and the bridge, the island is connected to various bits of the mainland. Clinton is so far south on the island that it is closer to Seattle than it is to Deception Pass.

The land is long, skinny, and a bit crooked. Glaciers will do that. Glaciers also did what they could to grind it down, and ironically built it up, too. Pick the right place and be five hundred feet above the Sound with views east to the Cascades and west to the Olympics. Some hills were knocked down by about 3,000 feet of ice only about 16,000 years ago. Some hills are little more than sand and gravel let behind after the glaciers knocked down mountains to the north. One glacier carved Penn Cove that’s aligned east-west. Another carved Holmes Harbor that’s aligned north-south. Somewhere and sometime there was probably a collision.

Barely populated is a relative term. Compared to Seattle, Whidbey is vacant. About 60,000 people live on the island, which would barely budge Seattle’s population. Spread out along fifty miles and there are stretches that skip past rural and head towards wilderness. But, 60,000 people attract a lot of businesses and services. It’s possible to live on the island without having to use the bridge or the ferries. If something isn’t available, get it delivered. And, on occasion, drive over to ‘Merika, anyway. Travel is enriching, right?

Whidbey Island is one of those rare mixes that balances getting away with being accessible, having almost everything you need with the rest being readily available, and being able to live a quiet rural life while being close to big city energy.

2 thoughts on “The Isle Land That Is Whidbey”