Maybe that title just jinxed it, but this is typically the time when the Puget Sound region quietly becomes one of the driest parts of the United States. Yes, in a month or two, Seattle in particular becomes drier than places like Arizona. The Puget Sound region’s reputation for raining all the time evaporates (but we don’t tell anyone.)

How can that be? How can Whidbey Island experience essentially a drought when “everyone knows it rains there all the time.”? Easy. It doesn’t rain here all the time. It may be grey for a few hundred of extra hours per year, but that’s overcast and drizzle, not rain. From about mid-July through mid-September, the skies dry. Welcome to summer, the tourist season, and a surprising amount of garden watering and irrigation.

Locals know that. It’s nothing new. But the debate is frequently about which parts of the island are the wettest, and which are the driest. Seattle’s story is simple. It’s only about 16 miles from the northern city limit to the southern city limit. Microclimates happen; but Whidbey Island is more than twice that. The northern tip is unprotected from Pacific Storms coming in from the west. The southern tip is barely protected from systems that detour around the Olympic Mountains and get turned north up the Sound. The middle is the “banana belt”, a region that enjoys the rain shadow generated by the protection of the Olympics.

Arguments range over which place is the wettest or the driest. Fortunately, there is data for such things (though finding it can be difficult. Thanks, Whidbey Island Conservation District.) 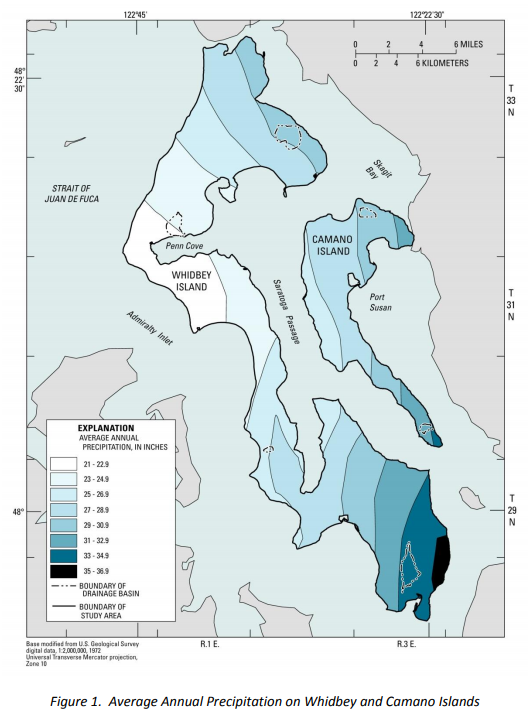 The area west of Penn Cove claims the prize for the driest. Seeing the fields of Ebey’s Prairie in Spring seem like that could be disputed because they can become large ponds. But those ponds are shallow, and soak into the soil or evaporate. It isn’t a desert, but those fields may only get 22 inches of rain per year. As for the wettest part, folks in the ferry line get over 35 inches of rain per year. That’s more than 50% more. While that sounds like a big jump, keep in mind that the average rainfall for the entire US, is about the same as the maximum for Whidbey Island.

There is enough variation that advice for a gardener in Greenbank may not be the best advice for a landscaper in Cornet Bay. The map (which comes from the Conservation District’s Drought Conservation Planning for Whidbey Island) should help. It should help, but the greater help is probably the folks in that neighborhood that know about that microclimate and the local soils. The glaciers may have scraped the land clean, but when they retreated they deposited salt, gravel, and clay in glacial streams, ponds, and sinks. (Which is why siting a septic system isn’t as easy as it seems.) 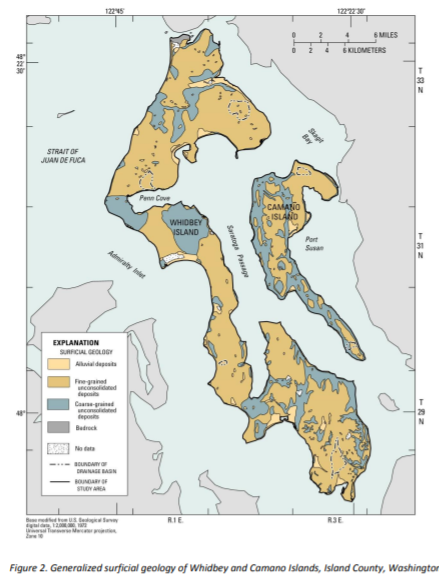 In the meantime, the soils are soaked and the Sun is powerful, great conditions for things to grow in farms, fields, and gardens – and lawns. Time to grow. Time to mow.