The King is coming to town, the King Tides, that is. Tides go up and down, in and out. Some days more than others. The days with the highest high tides are king tides, when a royal amount of water washes onto the shore. The winds are coming to town, too. About every other day since the previous post Mother Nature has been causing wind warnings for various parts of the island. On rare occasions, both things happen at the same time. Welcome the King and the Mom.

The good news about a king tide is that it is predictable. The Earth’s spin, its orbit around the Sun, and the moon’s orbit around the Earth are all steady enough to be reliable to most of us. Researchers can get picky and notice fluctuations that no one else notices, but that’s why they’re so good at what they do, they never stop improving their predictions. The tides aren’t news, but they are a caution and an opportunity. They’re a caution for people and property in proximity to the shore. Some new homeowners may be surprised to find their back porch getting washed in salt water, or at least find the walk to the beach is temporarily much shorter. Driftwood gets rearranged. Water can touch beach grass with no sand between them. 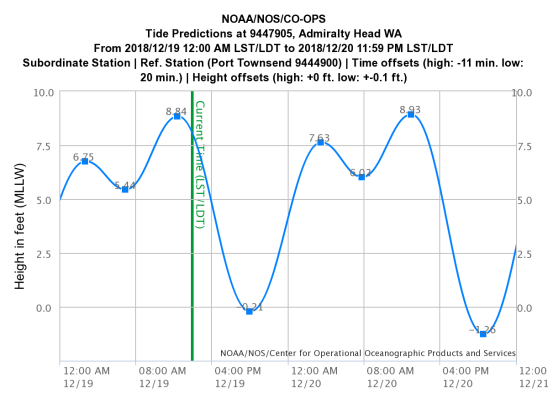 Despite complaints, weather predictions are improving. And yet, places like windward coasts are challenged by the lack of weather stations upwind, out at sea. Add in some wind diverters like the Olympic Mountains, and some vagaries in those parts of the climate we don’t quite understand, and wind storms can hit or miss or surprise. One day forecasts tend to be very good, or at least much better than they were a decade ago. A wind storm is coming, another force that can push water around. Waves rise, and low pressure systems lift the surface of the ocean in variations of storm surges.

A very high tide and a wind storm are expected to happen at the same time December 20, tomorrow as this is being typed.

Just after noon, a day before the Winter Solstice, the tides will rise and the winds will hit.

“COASTAL FLOODING…Minor tidal overflow is expected with flooding of low lying areas along the shoreline of up to 1 foot above highest astronomical tide.” – National Weather Service

That washing of those back porches may get a prolonged soak, and maybe even a scrubbing as waves pile up for a while. If all goes well, none of that driftwood will knock on doors, walls, windows, or people.

It’s all temporary. Tides retreat, regardless. These winds are expected to abate within a few hours.

The cautions should be obvious. Dodging flying driftwood isn’t trivial. Rising tides lift all boats, and they also lift entire trees. Getting hit by a tree hurts. Be careful out there, but if you can find a safe place to watch from the show can be magnificent. (Here’s a video from the south end of the island, Cultus Bay, during a high tide wind storm that wasn’t even a king tide.)

The opportunities aren’t as obvious, but they are valuable. Photographers are asked to take pictures during king tides to document actual high tide lines. Maps are good, but they are full of guesses. Things like flood insurance, land protections, and zoning concerns greatly benefit from what’s real rather than what’s on a piece of paper. Check into the Washington King Tides Program for details about how to participate, and also just to see the official king tide calendar.

Tomorrow isn’t an official king tide, it will just look like one. About a one foot higher high tide will happen in about a week, with some variation depending on location. If there’s a wind storm then too, well, that’s why several roads have Water On Roadway signs. It isn’t because of little freshwater puddles. The ocean has come to visit. (If you drive through one, remember to wash that corrosive salt water from your car.)