So, which is it? Is Whidbey Island a rich person’s playground, or a rural backwater surrounded by water, or a place driven by the military? Stories start with seeds of truth. There are many ways to look at a place, but let’s spend some time following the money.

Who is making how much? JusticeMap.org uses data from 2014 to map out the median incomes are census tracts in the US. This is certainly a mixed set of data. The highest median income (~$78,000) is south Oak Harbor. Maybe that’s where the Navy officers live. Right next door is a tiny parcel with much lower income (~$41,000). Small changes make big differences. The place with the lowest incomes (~$27,000) is surprisingly close, but take a look at the satellite photo and see that it is paved and called a runway. Most of the rest of the island is a much less dramatic blending of areas with about $55,000-$65,000 per year. Nothing exotic there, at least in terms of income. 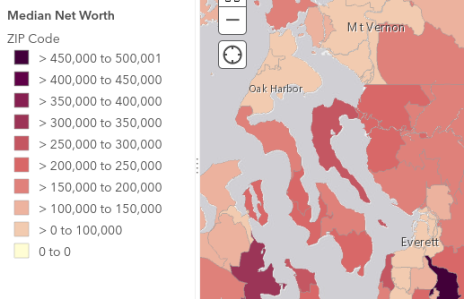 The emphasis shifts south when net worth is measured. Oak Harbor net worths are frequently about $63,000 (2016 data from arcgis.com). A little farther south in Coupeville and the number triples to ~$195,000. Get down to Greenbank and Freeland and it climbs to ~$213,000. Langley, a place known for its fancy tourist town of Langley is actually less, ~$173,000. Maybe the money visits, but doesn’t stay. Clinton, that’s mostly known for the ferry terminal, sits at ~$206,000. Maybe that’s a commuters’ bump.

It isn’t a surprise that income and net worth don’t match up. Young people working hard can have a lot of income, but too few years to have saved up much. Retirement happens when net worth is great enough that income can drop to whatever.

Another measure is housing. Browse back through earlier posts and read Mansions on Whidbey. The data haven’t changed much since it was published in June. Of approximately 290 homes for sale on the island, 40 of them are priced at over a million, with two dozen of them on the south end of the island. As for multi-million dollar homes, all are south of downtown Coupeville.

It is overly simplistic, but fun to typify the island as: the folks making money live north, the folks who saved a lot live in the middle, and the folks living the rich life live in the south. The reality is far more nuanced. Statistics are fun and handy, but people are individuals, no one is a stereotype. The person making the most can live anywhere on the island. The person making the least may be their neighbor. And it can all change with a move, a bit of chance, and an opportunity.

The story also changes with the seasons. Today’s the day after Labor Day. The summer exodus is underway. Vacation homes are being emptied, closed up for the season. Some businesses will do something similar. The nature of the island is about to go through one of its annual changes, but that’s another story and another post.

2 thoughts on “Following The Money”