Folks familiar with the summer solstice already know about the longest days and shortest nights of the year (which aren’t necessarily on the solstice and not necessarily with the earliest sunrise or the latest sunset. Want an astronomical digression? Dive in here.) Whidbey Island sits in an accidentally special location. We may not be above the Arctic Circle where the Sun won’t set for a season, but the island is at a high enough latitude that part of the island will only be truly dark for a few minutes.

Don’t turn off your headlights. It is still dark enough for our weak human eyes trying to do regular human things, like drive. But, sunset and sunrise have many fine distinctions that most folks ignore, but that many pay great attention to. 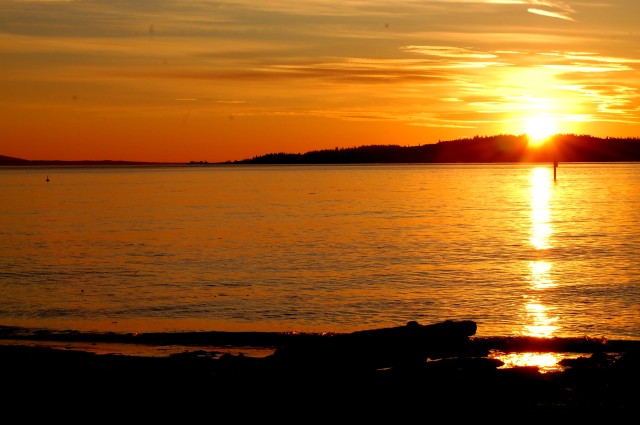 Start with the easy one. Do you think the Sun has set (or the horizon has risen up to meet it) when the Sun touches the horizon, when the middle crosses it, or when the last little bit of Sun isn’t visible? How about the horizon? Is it sunset when the Sun goes behind any hill, or only when it dips below a sea level line that few get to see (except islanders)?

Those distinctions are small compared to the ones that really matter. Add three other definitions: civil, nautical, and astronomical. 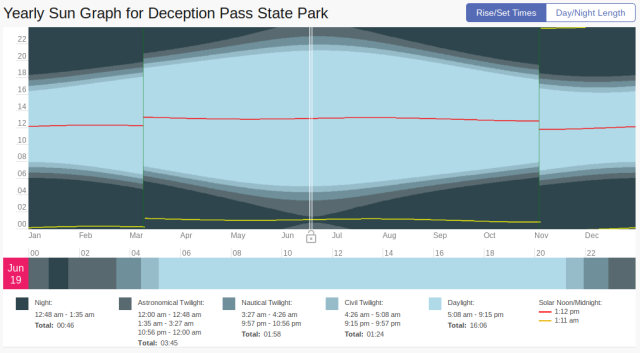 The world doesn’t suddenly go dark after the Sun is obscured by the horizon. It may be time to finish up some chores or get the kids to come in, but there’s enough light see without a flashlight. Normal things on land are still relatively easy to see, until civil twilight is over.

Mariners appreciate nautical twilight. They may not be able to see the details around them after civil twilight, but the horizon is visible (weather permitting) which means they can continue to navigate. That’s handy when you’re trying to find a safe harbor for the true night.

The last step is reserved for the people who treasure true darkness (the ones who are also justifiably upset by light pollution): astronomers. They live for (or at least work within) the time when the Earth blocks the sunshine, and has fallen far enough that even the sunshine bouncing around in the atmosphere can’t make it as far as a human eye. We’re rarely truly in the true dark. The moon can throw back a lot of light. Starlight adds up. And, then there’s that light pollution. Ah, but there are also auroras, but that’s another story.

Whidbey Island sits beside the border where astronomical sunset and astronomical sunrise almost happen at the same time. At the island’s northern tip, on the summer solstice, there are only 45 minutes of true night. That’s tough for an astronomer, but it can be a marvelous bonus for people who like to work and play late.

The latest sunset is 9:16PM, but civil twilight holds until 9:57PM, and nautical twilight lasts until past midnight (daylight savings shifts things, a bit.) Get home from work at 5:30PM and have more than four hours of light. That can be enough time to mow the lawn and enjoy a drink on the deck.

The flip side also means an early sunrise. The Sun may come over the horizon as early as 5:08AM, but the atmosphere has been bouncing photons our way since 1:34AM for astronomers, 3:27AM for mariners, and 4:26AM for folks trying to get things done in the yard.

The earliest and latest times shift by a few days; but those details don’t matter as much as making sure to adjust to somehow squeezing in eight hours of sleep when the night is really only about five hours (depending on your ocular sensitivity.) Heavy blinds can help. So can an attitude shift that jumps in and enjoys the longer days.

As for the flip side, at the other solstice, well, that’s a different story; but at least it happens when it is good to sit inside, stoke the fire, and grab a book.