Snowing And Driving On Whidbey

Forget about it – if you can. If not, drive carefully. The winter was warming up as if it was going to let spring get a head start. Bulbs were up. Buds were forming. Skunk cabbage

was poking through the wetlands. They’re still there, but so is frost, snow, and ice. Fireplaces are busy. Comfort foods like roasts and hot buttered rum are in peoples’ posts.

Whidbey Island averages at most two inches of snow in a month. December and February are a pair of peaks. Four other months get enough snow to record, but the averages are fractions of inches. Some years, there’s no snow at all. This year isn’t one of them.

Snow here is like snow anywhere. Some folks like it. Some folks avoid it. 2017 was lucky enough to have a white Christmas. Here we are at the end of February watching a variety of responses. Kids got out sleds, but had to walk to find enough snow. People who can work from home are glad to do so, especially if they have a good and fast internet connection. Others with good and fast internet connections are probably using it to watch Netflix or the Olympics.

It may not snow much, but that’s why the impact is amplified. There are fewer snowplows. Drivers get less practice driving in the snow, so each event is a new training session in patience and control. If the island was flat and farther south, an inch or so of snow would be easily removed and melted with a bit of sunshine. The hills that contribute to the island’s character also create cautions. Slippery stretches that are familiar to locals manage to surprise those who remembered too late about little steep sections, maybe even with a corner or curve or two. One stretch of road scattered about ten cars. More severe accidents are sadly inevitable as people who must drive must take risks.

As one islander pointed out, driving around can seem like no problem – until you see a shaded spot that has a shine. All the more reason to drive slowly, pay attention, and stay home if possible.

There is plenty of good news. There are plows, which usually means the highways and major arterials are cleared. Critical intersections and those familiar slippery sections frequently get sand or gravel spread by the county. Some roads, particularly shaded ones, may get preemptively closed waiting for a bit of warmth. While some schedules must be kept, “island time” gets a broader definition. This Thursday’s meeting becomes next Thursday’s meeting. The phones and the internet get more of a workout.

Snow is rare. The mix of weather required for it to fall is uncommon. Snow needs moisture and cold air. Moisture is usually not a problem (until August, but that’s another story.) Cold air is moderated by the Pacific Ocean, but Canada and Alaska are close. When cold air runs into wet air they mix and make snow. Usually, the wet air comes in from the south, and of course, the cold air comes in from the north. Getting them to meet right over the island is just a bit of luck, good or bad depending on your view. That also means either system can turn off the snow. If the wet air pushes in harder, the rain melts the snow. If the cold air pushes in harder, it is usually dry, turning the days into clear and brilliant opportunities to see snow-covered mountains. The ice may stay around, but gets worn down, and usually doesn’t get reinforcements.

Compared to the truly snowy regions of North America, Whidbey Island hardly gets any snow. It is no surprise that many folks move from those places to this place. Rarely is it necessary to shovel snow, or use a snowblower. Skiing and sledding are fun, but on the island they are mere stunts compared to the world-setting snows of Mt. Baker and Mt. Rainier. There, snow seasons can accumulate over 1,000 inches. They are the sites of different, more epic versions of stunts which explains Washington’s athletes that make it to the Olympics.

This is a rare event. The forecast actually calls for alternating snow and cold for the next week. None of the days are forecasted for more than an inch. Microclimates modify that. This time, down by the water the snow barely covered the sand, while the hilltops had over five inches. Pick your climate. And maybe buy a snow shovel, just in case. Or, spend the money on a nice wine and book collection. Your choice. 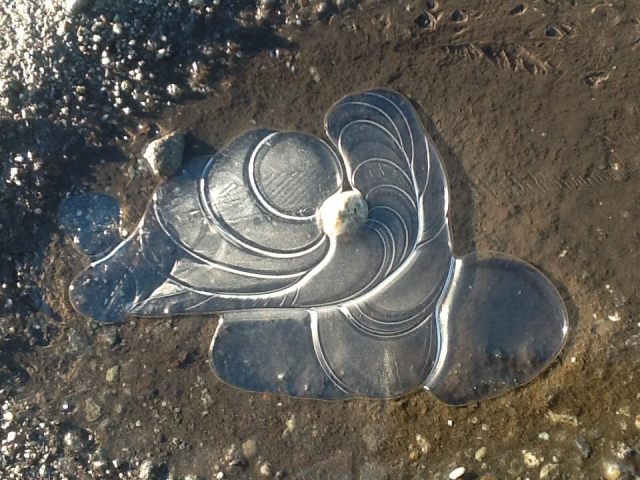