Until about 150 years ago, the island was home to full-time residents that stood 200-300 feet tall. Whidbey’s giant cedars, conifers became known around the world for ship masts. Smaller trees helped build Seattle and helped rebuild San Francisco. Almost all of that old-growth is gone. Enough survives to create cathedrals and canyons as roads pass through. In the undergrowth, holly and rhododendron enjoy the extra light and add color with their berries and flowers.

It is the big leaf maple and the alders that make the biggest difference. They are considered weed trees because they sprout up where the forests fall. “Weed” is an odd adjective for trees that can grow to over 150 feet. Their size is why their influence is so dramatic. In the summer, they fill the remaining spaces, keeping houses cool, hiding personal sanctuaries, and making the woods seem impenetrable. In the winter, locals know it is possible to peek at peaks, be inspired by rare glimpses of creative properties, and get a true feel for the land. Instead of thinking of the land as featureless and inaccessible, it is possible to see the rolling character of the ground, salmon streams, occasional glens, and maybe opportunities to create your own sanctuary.

The time moves quickly. Nature doesn’t pause for long. Eventually, buds will blossom and pocket views may retreat. Before they go though, a few lucky years provide a bonus of white snow on coppery madronas framing shoreline vistas. 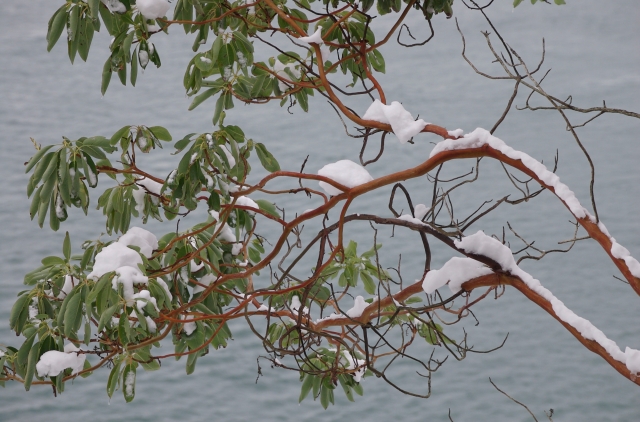