Holly And Ivy And Oh My

Of all the classic trappings of the holidays, snow is about the only thing Whidbey doesn’t have in abundance. But, pine trees, holly bushes, English Ivy, many of the plants that grow in the background of Currier and Ives prints live here, whether naturally or accidentally or purposely planted. Decorating is certainly easier when a walk through a neighbor’s woods can mean a carload of material for wreathes, garland, and of course, the tree. 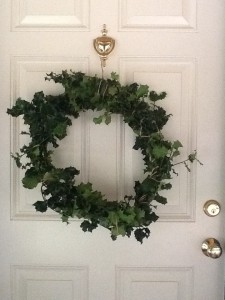 For a while, Whidbey had a surplus of ice, more than 2,000 feet of it; but that was over 15,000 years ago. Between then and about 150 years ago the land switched from gravel to forests. Trees over 200 feet tall stood unchallenged, except by each other. Then, settlers arrived and saw them as a source for the tall ships that drove early global commerce. What remains is more modest, but then, it is hard to find a living room that can hold a 200 foot tall tree – and still have room for the star on top.

Growing smaller trees is natural, whether in the forest or in a tended farm. Get the right permits and maybe you can find something better than a Charlie Brown tree. Or. Visit a tree farm. Maybe cut your own. Maybe let them do it. And. There’s always the tree stands edging their way into parking lots or open fields. Romance or practicality, take your pick.

Holly and ivy aren’t as natural as the conifers, but they grow so well here that they’re considered invasive. So, harvesting a bit (with the owner’s permission, of course) might be considered a favor, a bit of a gift. Twine them together, using the ivy as a vine that pulls the holly into a ring, or ties it into a long prickly rope. The prickly part is a bit less obvious when the lights, ribbons, and maybe some ornaments are added.

Creative types play with sea shells (and glue guns) to make seaside decorations to hang on the tree. Moon snail shells with their version of a nautilus shell can be painted as if they were winter Easter eggs from the water. Hollowed out Dungeness Crab probably show up somewhere. Wander through art galleries and gift shops to find people playing and producing things with sand dollars, which can be lighter and easier to hang.

Want something that isn’t only ornamental? Enough herbs grow readily that wreathes can be decorative and culinary. Hang it on the door, and have some recently cut rosemary, sage, lavender, and maybe some bay ready for a quick trip to a simmering soup.

One handy thing about using the local foliage for the season is that it is bio, as in biodegradable. When January arrives, some can be added to the compost bin, used as mulch, maybe chipped and shredded as necessary, or hauled off by a non-profit doing a charitable deed.

And then that rare thing can happen, sea level snow in just the right season. Then, get out the camera, snap some shots (keep Instagram busy), and produce that bonus – just the image you need for next year’s cards.

Oh, and then there are the nurseries, florists, … 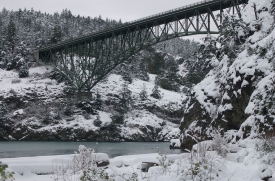 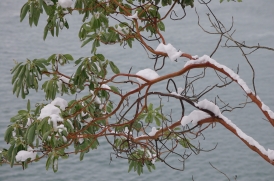